History
On January 11, 1830, “La Grange College” opened with an enrollment of 70 students. Eight days later the college became the first state chartered college in Alabama. The enrollment peaked at 139 in 1845.

After LaGrange College moved to Florence in January 1855 (becoming the roots of today's University of North Alabama), a group of LaGrange citizens reorganized the original site and reopened it in 1858 as the LaGrange College and Military Academy. The State of Alabama provided military equipment and scholarships. The Academy soon flourished and became known as the “West Point of the South.”

By 1861, the enrollment was almost 200 cadets at LaGrange Military Academy. During its existence, 259 cadets from nine states attended the Academy. The college was burned during the War Between the States on April 28, 1863 by federal cavalry commanded by Colonel Florence M. Cornyn under General Granville Dodge.

LaGrange is open Daylight hours, Year Round. The Welcome Center is open Sun 1-4 p.m. or by appointment.
You can enjoy a mountaintop Bed & Breakfast on location at Historic LaGrange.
For Booking information click here.
Entry is always 100% free.
For more information, see our map page.

LaGrange Living Historical Association is dedicated to the preservation of the history and memory of the Lagrange Mountian. We do this through the preservation of the buildings, artifacts, and pioneer cemetery of this historical village. We seek to educate public, and future generations of the Heritage of the area and the culture and life of the Civil War. 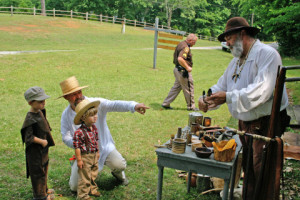